Description
This evergreen vine is a relative of the edible fig, Ficus cariaca. Creeping fig is very rapid climber able to cover vertical surfaces 3 and 4 stories tall with the aid of a powerful adhesive. This plant has developed a specialized structure, an adhesive pad that secretes a sticky substance that adheres to almost any surface. Clustered roots in F. pumila are sent out forming fine root hairs. These in turn secrete a substance made up of polysaccharide and protein. The roots and root hairs stick together forming the adhesive pad. Pads stick to almost any surface. If the roots do not touch a surface they usually dry up, if they touch moist soil they tend to branch and change to a typical root.

Juvenile leaves are small heart shaped leaves that are 1 inch long by about 3/4 in wide, they are held closely to the surface creating a mat of foliage that extends barely 1 inch from the surface it is growing on. Once the vine reaches the top of its support if will begin to form horizontal branches on which larger adult foliage is produced. Adult leaves are more leathery than the juveniles, and are dark green, and about 3 in long by 2in wide.

The plant will produce a fig. These will grow only on the mature horizontal stems, they are pale green in color and about 3 in long by 2.5 in wide There are several cultivars, including a variegated and crinkled leaf form. 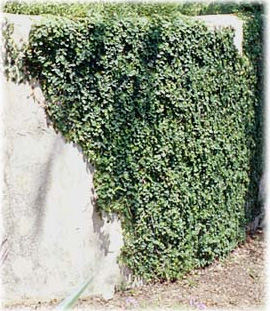 Location
Creeping fig is native to East Asia and is found on Japan’s southern islands, eastern China, and Vietnam. This vine is a popular landscape item in many warm climate areas.

Culture
Creeping fig is not particular about soil. This vine will grow at seaside if protected behind dunes or buildings.

Moisture:
Water when dry when young. Once the vine matures you can let it fend for itself even during droughts.

Propagation:
By cuttings or by layers (the vine will form roots wherever it touches the ground). This plant requires the fig wasp Blastophaga pamila for pollination.

Use to create green curtains of dense foliage on block, masonry, and concrete walls. Do not plant on wooden structures as the secretions of the adhesive pads can damage the wood. The city of Orlando, Florida uses this vine to soften concrete freeway supports which helps to dampen traffic noise as well as provide visual relief. Disney and the other theme parks make use of creeping fig to create “instant” topiary. Wire frameworks are created of geometric shapes, animals, and even cartoon characters. The frames are lined with spaghum moss and filled with growing medium. Creeping fig is planted in the frame which rapidly grows to cover the shape in a thin coat of fine-textured juvenile leaves. This vine also makes a good ground cover for large plantings where it looks great scrambling over boulders and tree trunks.

Other then its use as a decorative plant, the fruit of F. pumila is also used in cuisine. In Taiwan, its fruit is turned inside out and dried. The seeds are scraped off and a gel is extracted from their surface with water and allowed to set and form a jelly known in Taiwan asaiyu jelly , and in Singapore as ice jelly. The jelly is not commonly made or found outside of Taiwan though it can be bought fresh in specialty stores in Japan and canned in Chinatowns.
According to oral history, the plant and the jelly was named after the daughter of a Taiwanese tea businessman in the 1800s. The jelling property of the seeds was discovered by the businessman when he drank from a river in Chiayi, and found a clear yellowish jelly in the water he was drinking and was refreshed upon trying it. Looking above the river, he noticed fruits of vines hanging which contained seeds that exuded a sticky gel when rubbed. He gathered more of the fruits and served them at home with honeyed lemon juice or sweetened beverages. Finding the jelly containing beverage delicious and thirst-quenching, the businessman delegated the task of selling it to his daughter Aiyu. The snack was very well-received and became highly popular. The businessman eventually named the jelly after his daughter. 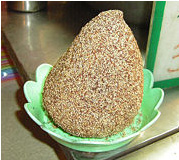