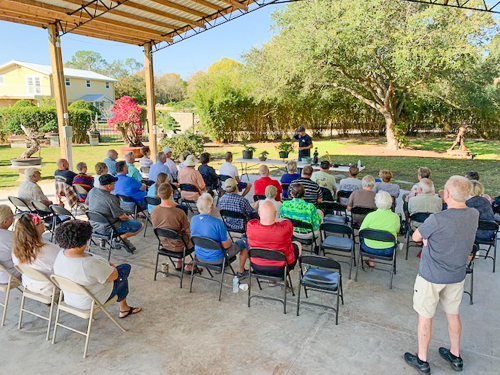 We enjoyed a wonderful Demo by our local teacher Jason Osborne last Sunday!! Our 2nd program in our NEW outdoor Pavilion!!

We had absolutely beautiful weather, a nice breeze and comfortable temperatures.  We learned about bonsai outdoors while enjoying the birds singing!

Premna is one of the best “new” tropical species of bonsai!  They grow very fast to develop a nice bonsai in a short time. The tiny leaves are great for bonsai.  They produce a white flower, although not very showy. They develop very compact foliage pads of tiny leaves. Re-pot these in spring/summer.

Jason started teaching classes for us here at Wigert’s when we made the move from Pine Island to North Ft Myers in 2008.

Jason says right now “Premna” is his favorite species but that changes with “Black Pines”- his other favorite! Jason has some fantastic black pines, some of the best in FL!

His personal collection has about 70 Bonsai trees and another 70 or so in training.  You can say he definitely caught the bonsai bug!

These are some comments from students that attended the Premna Demo, we asked them what they learned:

Phyllis (in Fort Myers):
“Premna is a very fast growing tree, so is Gmelina.  I learned that you want to wire branches when they’re green, before they get woody, due to brittleness. A branch can come right out of its “socket” rather than breaking.

Jason also said that cut paste on a cut is largely due to keeping moisture out AND keeping moisture in; that a premna will heal nicely (roll over) if the cut is made clean by a little sanding.  Any suckers (branches growing from the lower half of the tree, especially straight up) should be removed because they take the tree’s energy.

I also learned what to watch for with any tree being root bound:  Pooling of water on top then draining instead of going right through; maybe “tired” looking leaves.  (This was a little tip about any species…)”

Karen (in Cape Coral):
“He talked about Premna and it was a great bonsai tree.
How you could get it to thicken up quickly/ you could get a small bonsai and pot it in a 3 gallon nursery pot and set it on the ground and let it run – but you still need to “work” it. Take off suckers – they take away energy and taper. Can wire some for movement. Wire growth when still green – use thickest wire you can. It won’t cut in like thin wire does.

Great review of basics such as:
-Look for movement and taper when choosing branches to keep. Promote side to side growth not under or up. No inside curves or v.
-Work on primary branches first- detail wire later. How to shape using the wire to support outside of the curve and fingers for inside.
-How to handle large cuts and broken branches with cut paste.
-His fertilizing using slow release as well as organic and miracle grow.
-At the end of summer scrape surface soil to remove summer “junk” my word not his ? apply fertilizer and soil.

And of course a great demo for styling a tree!
Love these demos!”

Bruce (in Cape Coral):
“Premna are very fast growers. Even faster if grown in the ground. Remove suckers they steal energy. Thin the whorls to just two branches. They bud back easily Let the branches run extra long to thicken that you think you are going to use later. After you cut them they will back bud. Get wire on branches when they are green to avoid breakage. Because they grow so fast you need to stay observant for the wire cutting in too deep. When creating deadwood do it when still green. Wood becomes very hard and brittle. Ramification is easily achieved with branch maintenance. A freeze won’t kill them but they may lose leaves. Not too many problems with bugs and disease.

I enjoyed the class and will leave the ones I have in the ground for another year.”

Phil (in Fort Myers):
“I’ve been growing Premna for a while now and pretty much understand what it likes. Something that should be pointed out is that it doesn’t tolerate frost. Bring it inside if temps are expected to go below 40. That pretty much goes for almost all tropical though…”